Shortages in food, medicine and petrol, delays at the border for the flow of goods, price increases for utilities, fuel and food, and increased checks for UK citizens travelling to Europe.

On 18th August 2019 an explosive document about the government’s so-called “Operation Yellowhammer” was been leaked to The Sunday Times. It details, using the government’s own predictions, how disastrous a No-Deal Brexit would be for the country.

The report shows that the government expects a No-Deal Brexit to lead to shortages in food, medicine and petrol almost immediately, delays at the border for the flow of goods lasting up to six months, price increases for utilities, fuel and food, and increased checks for UK citizens travelling to Europe.

Operation Yellowhammer covers 12 "areas of risk", such as movement of goods and people across borders, UK food and water supplies, healthcare and transport.

The full text of the leak is below, and you can read more here:

On 11th September 2019 the government was forced to release the actual Operation Yellowhammer document, the full text of which can be found here.

When the UK ceases to be a member of the European Union in October 2019, all rights and reciprocal arrangements with the EU end.

For the purpose of freight flow and traffic management, as October 31 is a Thursday, Day 1 of Exit is now on a Friday rather than the weekend, which is not to our advantage. Exit Day may coincide with the half-term holiday, which varies across the UK.

In a small number of instances where the impacts of Brexit would be felt negatively in the EU as well as in the UK, member states may act in a way that could benefit the UK.

France will impose EU mandatory controls on UK goods on Day 1 of No Deal and has built infrastructure and IT systems to manage and process customs declarations and to support a risk-based control regime. On Day 1 of No Deal, 50%-85% of HGVs travelling via the short straits may not be ready for French customs. The lack of trader readiness combined with limited space in French ports to hold “unready” HGVs could reduce the flow rate to 40%-60% of current levels within one day.

The worst disruption to the short Channel crossings might last 3 months before flow rates rise to about 50%-70% (as more traders get prepared), although disruption could continue much longer. In the event of serious disruption, the French might act to ensure some flow through the short Channel crossings.
Disruption to Channel flow would also cause significant queues in Kent and delays to HGVs attempting to use the routes to travel to France. In a reasonable worst-case scenario, HGVs could face a maximum delay of 1½-2½ days before being able to cross the border. HGVs caught up in congestion in the UK will be unable to return to the EU to collect another load and some logistics firms may decide to avoid the route. Analysis to date has suggested a low risk of significant sustained queues at ports outside Kent that have high volumes of EU traffic, but the Border Delivery Group will continue to work directly with stakeholders at those ports to support planning readiness.

UK citizens travelling to and from the EU may be subject to increased immigration checks at border posts. This may lead to passenger delays at St Pancras, Cheriton (Channel tunnel) and Dover, where border controls are juxtaposed. Depending on what plans EU member states put in place to cope with these increased immigration checks, it is likely delays will occur for UK arrivals and departures at EU airports and ports. This could cause some disruption on transport services. Travellers may decide to use alternative routes to complete their journey. 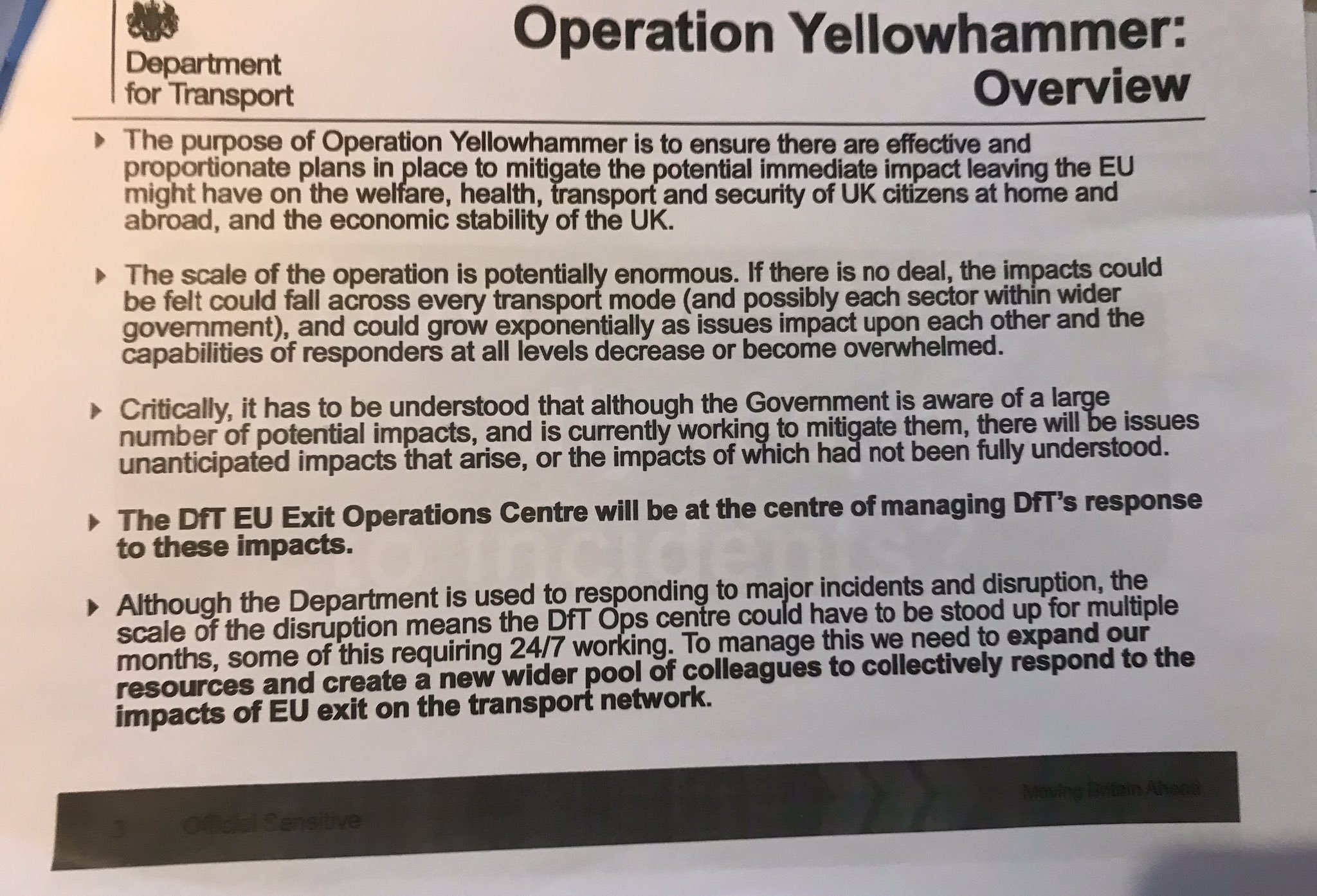 Law enforcement data and information-sharing between the UK and the EU will be disrupted.

Some cross-border UK financial services will be disrupted. A small minority of insurance payments from UK insurers into the EU may be delayed.

The EU will not have made a data decision with regard to the UK before exit. This will disrupt the flow of personal data from the EU, where an alternative legal basis for transfer is not in place. In no-deal, an adequacy assessment could take years.

Traffic disruption caused by border delays could affect fuel distribution in the local area, particularly if traffic queues In Kent block the Dartford crossing, which would disrupt fuel supply in London and the southeast. Customer behaviour could lead to shortages in other parts of the country.

Tariffs make UK petrol exports to the EU uncompetitive. Industry had plans to mitigate the impact on refinery margins and profitability, but UK government policy to set petrol import tariffs at 0% inadvertently undermines these plans. This leads to big financial losses and the closure of two refineries (which are converted to import terminals) with about 2,000 direct job losses. Resulting strike action at refineries would lead to disruptions to fuel availability for 1-2 weeks in the regions they directly supply. Government analysis of the impact of no-deal on refineries continues.

On Day 1 of No Deal, Her Majesty’s government will activate the “no new checks with limited exceptions” model announced on March 13, establishing a legislative framework and essential operations and system on the ground, to avoid an immediate risk of a return to a hard border on the UK side.

The model is likely to prove unsustainable because of economic, legal and biosecurity risks. With the UK becoming a “third [non-EU] country”, the automatic application of EU tariffs and regulatory requirements for goods entering Ireland will severely disrupt trade. The expectation is that some businesses will stop trading or relocate to avoid either paying tariffs that will make them uncompetitive or trading illegally; others will continue to trade but will experience higher costs that may be passed on to consumers. The agri-food sector will be hardest hit, given its reliance on complicated cross-border supply chains and the high tariff and non-tariff barriers to trade.

Disruption to key sectors and job losses are likely to result in protests and direct action with road blockades. Price and other differentials are likely to lead to the growth of the illegitimate economy. This will be particularly severe in border communities where criminal and dissident groups already operate with greater freedom. Given the tariff and non-tariff barriers to trade, there will be pressure to agree new arrangements to supersede the Day 1 model within days or weeks.

Demand for energy will be met, and there will be no disruption to electricity or gas interconnectors. In Northern Ireland there will not be immediate disruption to electricity supply on Day 1. A rapid split of SEM could occur months or years after the EU Exit. In this event there would not be issues about security of supply. However, there will probably be marked price rises for electricity customers (business and domestic), with associated wider economic and political effects. Some participants could exit the market, exacerbating economic and political effects.

Because of the imposition of checks at its border with Spain (and the knock-on effect of delays from the UK to the EU), Gibraltar will see disruption to the supply of goods (including food and medicines) and to shipments of waste, plus delays of four-plus hours for at least a few months in the movement of frontier workers, residents and tourists across the border.

Prolonged border delays over the longer term are likely to harm Gibraltar’s economy. As on the UK mainland, cross-border services and data flow will be disrupted. Despite the time extension to the UK’s exit from the EU, Gibraltar has still not taken the decisions to invest in contingency infrastructure (such as port adjustments and waste management equipment) and there are still concerns that Gibraltar will not have passed all necessary legislation for no-deal, opening up legal risks mainly for the government of Gibraltar. Gibraltar continues to plan for less significant border delays than in our Yellowhammer scenario. Crown dependencies may be affected by supply chain disruption.

Protests and counter-protests will take place across the UK, using up police resources. There may also be a rise in public disorder and community tensions.

Up to 282 EU and European Economic Area nations’ fishing vessels could enter illegally or are already fishing in UK waters: up to 129 vessels in English waters, 100 in Scottish waters, 40 in Welsh waters and 13 in Northern Irish waters on Day 1. This is likely to cause anger and frustration in the UK catching sector, which could lead to clashes between fishing vessels and an increase in non-compliance in the domestic fleet.

Competing demands on UK government and maritime departmental agencies and their assets could put enforcement and response capabilities at risk, especially in the event of illegal fishing, border violations (smuggling and illegal migration) and any disorder or criminality arising as a result, eg violent disputes or blockading of ports.

Low-income groups will be disproportionately affected by rises in the price of food and fuel.

There is an assumption that there will be no big changes in adult social care on the day after EU Exit. The adult social care market is already fragile because of the declining financial viability of providers.

An increase in inflation after the UK’s EU exit would affect providers of adult social care through increasing staff and supply costs, and might lead to failure within 2-3 months for smaller providers and 4-6 months for larger ones. There are also local risks — transport or staff disruption, severe winter weather or flu — that could exacerbate existing market fragility and that cumulatively could stretch the resources of providers and local authorities.

Intelligence will continue to be gathered to prepare for any effects on the sector, including closure of services and handing-back of contracts that are not part of the normal market function. In addition, by mid-August we will look at the status of preparations in four local authorities identified as concerns.

The Sunday Times and Take Back Control